Kentucky is a HTFF character.

Kentucky is an indigo shark with a white face and underbelly, two dorsal fins, fringed tail flukes, and two prominent eyebrow extensions that are shaped like shark fins.

He only speaks in low-pitched groans and rarely socializes.  He does, however, enjoy fried chicken and can be persuaded into doing anything simply by being rewarded with it. This makes him a common pawn in other characters' schemes. Whatever the motive, Kentucky will participate solely to get chicken dinner.

Kentucky's chicken craving is almost obsessive. If one takes his food, he'll go berserk and attack. But this diet has also left him with a number of health problems, such as constantly having to use the bathroom. His eating habits, if not careful, could even lead to him exploding. He lives in a tank inside a seafood restaurant, conveniently located next to a fast food joint. 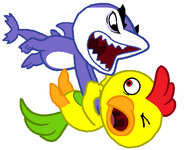 Ever wanted to see a shark vs. chicken fight?

Add a photo to this gallery
Retrieved from "https://happytreefanon.fandom.com/wiki/Kentucky?oldid=347102"
Community content is available under CC-BY-SA unless otherwise noted.