Leif is a HTF fan character.

Leif is green deer of Irish descent. He has a torn left ear and is blind in his left eye along a chipped tooth. He also wears bandages on his arm and lower torso. Leif suffers from extreme bad luck and is very superstitious. His luck seems to almost always kill him,and when he doesn't die, he tends to still end up in a bad situation at the end of an episode like being arrested.

Due to his bad luck, Leif has a hard time having jobs or even just hobbies, as his luck always ruins it for him. Still he tends to like doing things that doesn't require moving a lot, as he thinks he can avoid being hurt easy this way.

Also due to his blind eye, Leif is rather clumsy and can trip up a lot or mistake items for similar looking things, which mixed with his luck, leads to trouble. Even more trouble can occur thanks to his broken arm.

Leif also lives in a home shaped like a four-leafed clover and the inside is painted green. 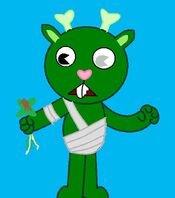 Retrieved from "https://happytreefanon.fandom.com/wiki/Leif?oldid=356789"
Community content is available under CC-BY-SA unless otherwise noted.