Where's she going in such a hurry?

Snow Where You're Going

Flynn/Mole (Snow Where You're Going)

Snow Where You're Going

Levy is a character of HTFF.

Levy is an ermine who always does something quick and rushed. Levy wears a blue beanie, scarf and a pair of blue gloves. She also has wavy shoulder-length dark blue hair. When she's not wearing her beanie, she wears a dark blue headband. She only can be seen without her beanie inside her house.

Not much is known about Levy but she's always seen running around the town and rushing without any reason. It's almost rare to see her standing still and normally walking. She only wants to do something quick and doesn't want to delay anything or being slow.

Levy can often be seen running at the side of a street in early morning. If she decides to walk, she will walk quicker than most normal characters do. Actually, Levy doesn't have any reason to be quick or in a rush. She only likes to do something quick and doesn't want to be a slow character.

As an impatient person who likes to do something quick, Levy will do two or more activities in the same time without a second thought sometimes. Her activities are always completely rushed and will give some bad effects to herself and other tree friends. Her mistakes are always made from her rushed activities.

She seems aware of how easy to die in HTF world and tries to avoid it. Her body is very agile and can easily avoid most dangers happening in that time. Levy also has a very good and fast reaction that makes her very aware of the things that happen in the town. She has many reasons to avoid some dangers but sometimes fails badly. Her quick personality will give others side effects and also will make something worse, which can lead to her death. She sometime never cares about anyone when she tries to defend or save herself from danger.

Levy is actually a worry and very curious person. Her worry and curiosity will instantly lead to her quick and impatient personality. She lives at a snowy place and seems to love snow and chilly weather. It's revealed that she has a light blue pet rabbit in Get 'Em Like You See 'Em. 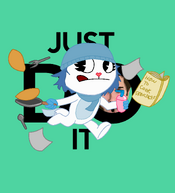 Retrieved from "https://happytreefanon.fandom.com/wiki/Levy?oldid=362491"
Community content is available under CC-BY-SA unless otherwise noted.