Watch out for that tongue!

Licky is a fan character of Happy Tree Friends.

Licky is a purple anteater who almost always has his tongue sticking out. He is an insane character who, as his name suggests, has a knack of licking things (supposedly a mental disorder). He also enjoys eating ants, though he will try to catch any insect if he gets the chance.

Licky presents unique scenarios in episodes, as his incredibly long tongue and habit of licking things have been known to put him in a variety of situations, from bothering other characters to getting into danger. Licky's injuries largely involve his tongue getting flattened, stuck, pulled, etc. He also sometimes kills characters by biting or eating their body parts for food.

Licky shows no or very little intelligence, and shows some signs of mental retardation. So far, his only intelligent instincts are when he attempts to save himself from his own death, mostly involving his tongue. He seems to have few friends, as he is insane.

Licky may have a psychosocial disorder, as he does not interact correctly socially. Because of this, he seems to have no friends; with the exceptions of Flaky, Howdy, Lessy, Hippy, Lary, Bun, Mary, and Sniffles, starting in Lick and Sniff. He seems to anger other characters, and is not liked very much.

In the episode Lick and Sniff, it reveals that Licky was actually a clone of Sniffles, but some of Nutty's DNA mixed in with Sniffles' in the process. Licky lived with Sniffles until he almost destroyed Sniffles' rocket. 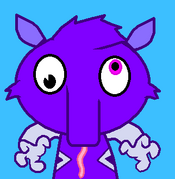 Retrieved from "https://happytreefanon.fandom.com/wiki/Licky?oldid=384549"
Community content is available under CC-BY-SA unless otherwise noted.