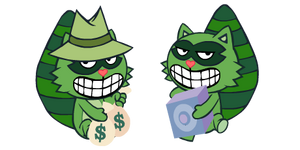 This is a page in a fanon site. For information about this character from the actual show, click here or here.

Lifty and Shifty are two identical twin green raccoon thieves. They frequently steal merchandise from the other characters, as well as hunt for treasure, ransack houses, or do anything to get rich quick. They have the same gender, color, markings, bushy tails, basic personality and almost identical voices. However, Shifty is the one who wears the fedora. They also have different forms on Happy Tree Friends: Partners Collide. They are set to appear as minor antagonists of The HTF Movie.

Though not publicly disputed or displayed there have been signs that Shifty has feeling for Petunia but refuses to display them. Hiding his feeling behind his cool behavior and his need to have things.

Retrieved from "https://happytreefanon.fandom.com/wiki/Lifty_%26_Shifty?oldid=386858"
Community content is available under CC-BY-SA unless otherwise noted.