NOT TO BE CONFUSED WITH Lilli, Lily, OR Lilly

Lillie is a character from Happy Tree Friends Fanon.

Lillie is a navy blue bear with a sky blue skirt and shoes. She is very sensitive to her surroundings, but she decides to play as a ballerina, and doesn't like being touched. Lillie is quite sassy, but has a soft side, and she will do anything to get ice cream.

She goes crazy if she gets touched, and attempts to murder who ever touches her. She doesn't like peoples germs, and fingerprints, so she would prefer to touch blood than someone's skin. She hates games where she/he need to hold someone's hand, which makes her dangerous. She even killed her own family from them touching her in one picture incident.

Rumor has it that she hated getting touched because she got horribly sick by a very sick person touching her, luckily she recovered, and got traumatized by the accident. But even though she hates getting touched, she is a great dancer. She plays as a ballerina/dancer in a lot of places, making her somewhat famous. When she goes crazy, her eyes turn red and Lillie's skirt turns from a round shape to a spiky shape. Her injuries are mostly based on ripping her hands or arms off by someone or something.

Lillie in a Smoochie. 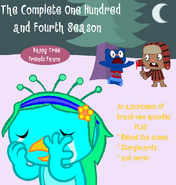 Touching Coral.
Add a photo to this gallery
Retrieved from "https://happytreefanon.fandom.com/wiki/Lillie?oldid=355376"
Community content is available under CC-BY-SA unless otherwise noted.