The pop-up style is retained from the previous season range.

"S is for Showers - Having some showers is seldom shameful."

"S is for Snooty, C is for Cranky - Someone's duty should be super safe! Cool critters can't crack under pressure while crankin'!"

"A is for Alex - Any aspiring artist makes anything look amazing!"

"K is for Kitty Kat"

"P is for Pyro - Provoking perfection for peevish reasoning is less-than-paceful Pyro's purpose."

"P is for Puffles - Prickly pufferfish will petrify this puffy, passe persian kitty!"

"L is for Lyle - Lyle driving his car up and down a hill."

"C is for Crook - This callous chump captivates catastrophes with his cynical captiousness."

"T is for Twirly, W is for Whirly - Taunting and tampering with tentative twerps since time tweaked. Wacky, wearisome winds will whack this waltzy wally into weighty, whimsical warranties!"

"B is for Baumey - Be the best with your buddy!"

"D is for Duuki- Get down and dirty with your deeds!"

"R is for Ramen - Ramen is the most relaxing noodle."

"R is for Rosalie - Ruling the river provides a radical reward!"

"T is for Treeter - Treat yourself with tremendous treats!"

"E is for Espy - Eating eggs early in the morning is extremely important!"

"H is for Hedgey - A handy hedgehog who is all about organizing!"

"M is for Munchies - Munching marvelous meals makes him have a marvelous mood!"

"S is for Spar - Sparking questions will be present around this sparrow!"

"A is for Auntie - Ancient Antiques for a Amiable Aged Lady"

"A is for Ambar - Appetite for A+ Aliments and B- Blood"

"T is for Track - Tracking foxes are terrific!"

"B is for Bone - Dogs devouring bones are bony!"

"D is for Drowsy - Sleepy sloths are detraining!"

"E is for Enjoyer - Koalas are entertaining and fun!"

"N is for Nerve - Nervous hamsters are nerve-wrecking!"

"L is for Laze - Lazy gerbils aren't called lazy for nothing!"

"B is for Barker - Lumberjack wolves are all about chopping down bark trees!"

"S is for Speed - Speedy cheetahs are charming!"

"P is for Pandy - "Red pandas can be professionally smart!"

"D is for Dr. Goat - Doctors are scientific!"

"P is for Purr - Purring whiskers can be really long!"

"F is for Furious - Furious oxen are no joke!"

"Y is for Yote - Yearning coyotes are all in about doing favors for others!"

"S is for Sweetale - Sweet guinea pigs are nice to others!"

"G is for Guitar - Great tigers are musicians!"

"C is for Cables - Pigeon and cable combo is something you don't see everyday!"

"S is for Sneaks - Sneaky bats are spooky!"

"C is for Cinnamons - Cinnamon sugar gliders are sweet!"

"C is for Cools - Cool shrews are very flirty!"

"G is for Gears - Gearing techniques can be present in badgers!"

"S is for Shock - Shocking seals are dangerous!"

"C is for Cream - Creaming desserts can attract sweet-hearted woodchucks!"

"F is for Flesh - Meat loving Tasmanian devils are meaty!"

"J is for Joyful - Joyful quokkas are happy!"

"V is for Veggie - Vegetarian pigs are veggie!"

"L is for Liquid - Liquid watering penguins are protective!"

"W is for Watcher - Watching fennec foxes are all about security!"

"T is for Tonguesy - Tonguesy anteaters have very long tongues!"

"O is for Onigiri - She likes cooking and swinging but not stupidity and farting!"

From Musk to Paws

Tricks Up My Sleeve

The Garden of Raymond 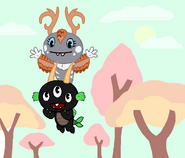 A New Kind of Odd 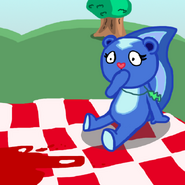 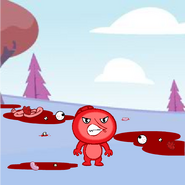 Better Hot Than Ever

The Love of Poison

Loves Me Kills Me Not

Out of the Hat 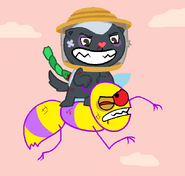 The Duck and the Fishes

Not the Right to Steal a Flower

A walk in the park 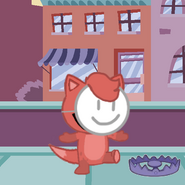 You're my biggest idol

Just to Slug You Steered

Look Out Down Below!

I Spy With my Little Eye 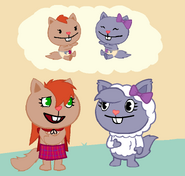 I Heart You The First Time!

Close But No Cigar 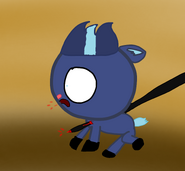 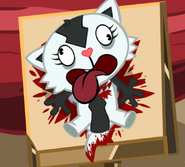 Are You Kitten Me Right Meow? 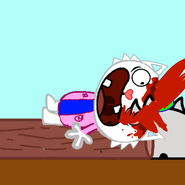 Sucks to Be You 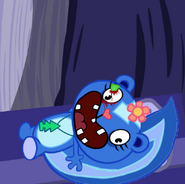 From a Moon Too Soon 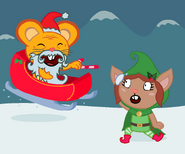 A Hell to Pay

You Fell into My Flytrap

Grill or Be Grilled

Happy To Swing By!

From One to Tentacles

Track My Way Down

Hey Guys, For a Prank Part 1
Community content is available under CC-BY-SA unless otherwise noted.
Advertisement