Start a Wiki
Lorenzo is a fan character.

Lorenzo spent most of his childhood on the streets with his two brothers, until his older brother, Terrence, became a defense attorney in 2015. This is a career that wouldn't last long, as on November 12th, 2018, Terrence was falsely convicted of killing his mentor, Daniel Fence Jr in an incident that would be known as the BR-2 Incident. This left Lorenzo devastated and determined to win Terrence freedom.

In 2023, at age 21, Daniel Fence Sr, world famous lawyer, and the father of the victim in the BR-2 Incident, took Lorenzo under his wing to help him become a defense attorney. In June of 2024, Lorenzo would take his first case defending Dale Spruce, and won, the success was all over the news.

Lorenzo is a pretty serious person, but also has a soft side. 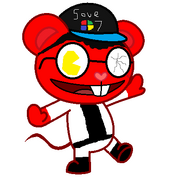 Previous Design
Add a photo to this gallery
Retrieved from "https://happytreefanon.fandom.com/wiki/Lorenzo?oldid=379983"
Community content is available under CC-BY-SA unless otherwise noted.