Start a Wiki
Lori is a character in htff.

Lori is a small mouse deer. She has a red t-shirt and glasses. Because of her appearance, she is often mistaken for a nerd, while she is very smart, she is also a dangerous warlock. Who will often get revenge on people who make fun of her by casting curses on them. Beyond that, she is very trustworthy, however none of the warlocks seem to believe her. She speaks in an incredibly squeaky voice, witch adds to her being impossibly to be taken seriously. 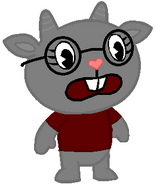 Retrieved from "https://happytreefanon.fandom.com/wiki/Lori?oldid=356665"
Community content is available under CC-BY-SA unless otherwise noted.