Don't be afraid of her.

Roaming around at night, flying, lantern

Lucerna is a character of HTFF and CCF.

During night time, she can be seen being very active and roaming around the town and forest. She uses her lantern to see anything around her. Since some people don't believe or don't know that gargoyles exist, they can easily freak out, get nervous and maybe make a situation worse. Lucerna actually doesn't want to scare anybody and tries to find a way to avoid it.

She actually wants to talk and befriend with other people when meeting them. She mostly enjoys roaming at the forest than in the town. She is serious most of the time and doesn't want any jokes or stupid things (mostly involve Lumpy). She always checks someone or something whenever she meets one. She really dislikes bad things, mostly crimes. When she sees a crime in front of her, she will begin to attack until she's satisfied at it.

Similar to Lammy, she may have schizophrenia(a mental disorder where patients often experience bizarre hallucinations and delusions that no one else sees) since she can see ghosts but it's actually just her imagination. Her mistakes are also similar to Lammy, as she wants to attack the ghosts (her imagination) but ends up unintentionally attacking someone else or might killing. She sometime mistake someone as a ghost if she can't see properly in the dark.

During daytime, she will turn herself into the stone form and sleep at various places at the town. She can't be killed when she is in her stone form because it's very difficult to break (but can be possible using something very huge and heavy). She will not be aware of anything nearby when she sleeps, unless something big disturbs her sleep and wakes her up during daytime. Most of her fates(mostly her injuries) happen during night time, the only time when she's very active. 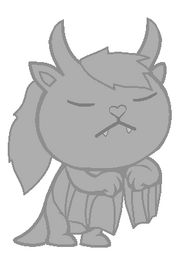 Retrieved from "https://happytreefanon.fandom.com/wiki/Lucerna?oldid=333680"
Community content is available under CC-BY-SA unless otherwise noted.