Welcome Back to Hell

Welcome Back to Hell
Lucy Clover is a sky blue-colored western gray squirrel who was a former "Princess of Fortune" and nowadays, lived as one of Happy Tree Town's unfortunate citizens. Despite her status is not royalty anymore, she still has some fortunes inside of her, though unlikely to save her for most of the parts.

Lucy is described as "a very mild and cheerful person who has no issues on being happy-go-lucky too much, will brighten your day with her light-hearted stories". However, she is also known to be intellectually challenged and can be extremely naive, as well as taking careless options. She is never thinking first and always went to action.

While some people said that she is pretty kind-hearted and lovable, others would say that her kindness has annoyed them and in few rare cases, disliking her for ruining their days. As much gullible as she is, Lucy never notices the signal of people's annoyance and thinks that they are just in bad mood, which can lead to, not only the tension feeling between the two but also the higher risk of getting killed.

Besides the point in her demeanor, as mentioned above, Lucy has fortunes inside of her and while it did make her survived from the hazards and incidents, it is not as always as her luck can go reversed and backfire herself. It is worth mentioning that the fortune never able to save the people around her and it can be worsened by her flaws. Even Lucy herself can make luck gives unfortunate consequences instead. However, nevertheless, her fortune may or may not save her from the one immense and intense catastrophe.

Lucy and Ginger are an interesting yet complicated couple, with the latter's irreverence and mockery attitude and the former's considerate nature. Their relationship is started when they were classmates during kindergarten, while Lucy sometimes get harassed by the other children for her softness, Ginger will stand up for her and act as if her bodyguard, they both grown up into more than just friends. Even though they argue about each other's behaviors on rare occasions, Lucy and Ginger are still in pretty healthy and good terms as well as forgiving for their actions.

Just as with Ginger, Lucy and Shiny friendship is another contrast between their personalities, with the former being modest and benevolent meanwhile the latter is rebellious and slothful. Both of them are best friends, despite their flaws. Shiny has no issues at all to bring her friend into her daily workfield and Lucy is moreso excited to be on adventures, however, also more on concerning their safety. Nonetheless, they are great friends.

Percentage of the deaths occurring: 00.00%

Percentage of the elimination: 00.00% 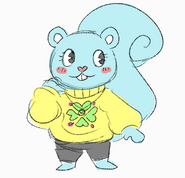 Created by Flur-Child
Add a photo to this gallery

Best meal is always sushi.
Add a photo to this gallery
Retrieved from "https://happytreefanon.fandom.com/wiki/Lucy_Clover?oldid=388346"
Community content is available under CC-BY-SA unless otherwise noted.