Hands off my Man!

Disco Bear (Hands off my Man!)

Hands off my Man!

Lustly is a fan character and the winner of LOD's final Vote or Die.

Lustly is a green ferret who desperately wants a boyfriend. She can fall in love with almost any male character she sees, but tends to grow dangerously obsessed with him. She would do anything to cheer up or prevent losing her love interests, even if it means causing damage to them, herself or others.

Lustly also gets jealous easily. While she can be friendly at times, she rarely seems to tolerate other female characters. In the event that one of her lovers/hostages interacts with another girl, Lustly would likely do something gruesome to the unfortunate victim. 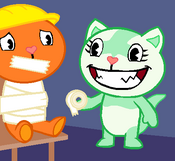 Retrieved from "https://happytreefanon.fandom.com/wiki/Lustly?oldid=388019"
Community content is available under CC-BY-SA unless otherwise noted.