Gonna be better with good melody.

Lyre and Lyra are characters of CCF.

Lyre and Lyra are aquamarine jackalope twins who always playing music with their instruments. Lyre, as his name says, always seen with a lyre meanwhile his twin Lyra is seen with wooden flute. Lyra appears to be blind and mute.

The jackalope twins always seen with each other, mostly when Lyre wanted to protect his blind twin. Lyre seems wanted to keep something dangerous away, even for a small thing. He might a bit friendly to others if he can trusts them. The twin almost together for the whole time but Lyra seems always wandering around and doing her own stuff.

Lyra usually a calm person most of the time and seems knows what's happening surrounding her despite being blind. She doesn't mind if her twin protecting her too much as long she can doing her own stuff and befriending with others. Her strong sense can helps her blindness. She also using her flute to "talk".

Both of them seem having an ability to manipulates sound and mostly using their instruments for it. Lyre can move or lift(even attack) some stuff surrounding him by using his lyre, also can hypnotizes a person. Meanwhile, Lyra casually can calm something down and also makes someone asleep, might can heals someone if she wants to. Same as Lyre, Lyra can moves or lifts objects but not for attacking.

Lyre's death usually happened more often than Lyra due trying to protect her way too much, also overdo his power. 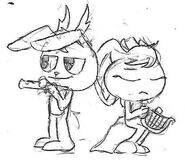 They potentially could work well against another pair of musical twins.

Not the bunny they wanted to meet.

Lyra gains sight (but is it a good thing?)

Retrieved from "https://happytreefanon.fandom.com/wiki/Lyre_and_Lyra?oldid=333686"
Community content is available under CC-BY-SA unless otherwise noted.