Start a Wiki
Marlin is a HTFF character.

Marlin is a blue marlin who lives in the ocean, thus he rarely interacts with most other characters. Marlin is quite active, usually seen jumping in and out of the water, and riding through currents. He also enjoys water sports like surfing.

Being a sought-after target by fishermen, Marlin may constantly have run-ins with fishing hooks, nets, and boats. His pointed nose can come in very handy to cut through nets and lines, or in desperate measures, kill fishermen. But his nose may also cause accidental damage to others. 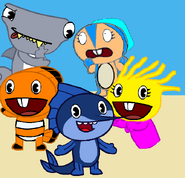 Marlin with some Coral Reef Friends

Marlin getting pulled by the fishing hook.

Add a photo to this gallery
Retrieved from "https://happytreefanon.fandom.com/wiki/Marlin?oldid=380799"
Community content is available under CC-BY-SA unless otherwise noted.