Start a Wiki
Marsh Mellow (or simply Marsh) is a HTFF character and former member of Creepy Cryptid Friends.

Marsh Mellow is a green gopher covered in slime the same color as his fur.

Living alone in a bayou, Marsh has a laid-back personality, often relaxing in the filthy water or playing his banjo. The slime on his body once mutated him into a multi-eyed swamp monster, but was later restored to his normal form. But favoring his life as a monster, he slimed himself up and retreated back to the swamp.

Marsh does not have many friends due to his gross habits and unsightly appearance, though he enjoys the solitude. The one thing he enjoys more is food. Besides the usual frogs and snails, he is also a fan of onions because of their taste, ice cream because he looks like it, and roasted marshmallows because of their gooey insides. 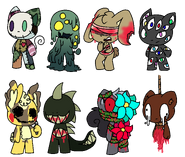 Add a photo to this gallery
Retrieved from "https://happytreefanon.fandom.com/wiki/Marsh_Mellow?oldid=384836"
Community content is available under CC-BY-SA unless otherwise noted.