Marus is a character for Creepy Cryptid Friends by Yellow-Spider-Kitty.

Marus is an orange mutant deformed cat, who was at one point a famous and beloved internet star, who was the star of a lot of cat videos. However he did get into a freak accident and is now deformed. He lives with cryipds and tries to start a new life as a monster. Behind that Marus is actually really nice and caring, and loves having fun. 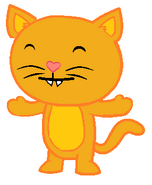 Even in mutant form, he can still cause a stir on the internet.

Add a photo to this gallery
Retrieved from "https://happytreefanon.fandom.com/wiki/Marus?oldid=340202"
Community content is available under CC-BY-SA unless otherwise noted.