Meaty is a panda who enjoys eating healthy. He is the direct opposite of Nutty because instead of candy and sweets, he enjoys healthy foods and has them stuck on his fur (possibly by tapioca syrup - a healthier alternative to maple syrup). Although he does eat meat and has some stuck on his fur, his favorite foods are vegetables. He is usually described as some sort of hippy because of this, also because he cares about the environment and talks like a hippy.

Meaty tries his best to stay into shape, through diet and exercise. However, he has a ferocious sweet tooth. He normally stays away from candy and sweets, but if so much as one sugary treat gets into his mouth, he snaps in a Nutty-like manner and goes crazy for more sweets. 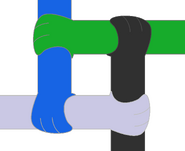 Meaty as a "Nutty clone"
Add a photo to this gallery
Retrieved from "https://happytreefanon.fandom.com/wiki/Meaty?oldid=380621"
Community content is available under CC-BY-SA unless otherwise noted.