Nothing wrong with dark magic, for now.

How Do You Love Me Now

Dolly (How Do You Love Me Now)

Medea is a character of HTFF.

Medea is a violet red porcupine who appears likes to use dark magic for her daily stuff. Her quills appear to be her hair with a ponytail and a hairclip that resembles a skull. She also wears ghost shaped necklace(or skull shaped sometimes).

Medea is a teenager witch who always using dark magic for her daily basis and other stuff. Medea is a bit snobbish person and always proud of herself about the dark magic she used. She might be rude sometimes but she enjoys some playful stuff and a bit friendly towards others, if she wanted to.

She really enjoyed using dark magics but do awares of the dangers of it. She lives inside the cave so she can uses them without someone interrupting it. She always finds some "dark" stuff to make the magic, mostly animal skeleton, blood and flesh. If she found something which is not feral animals(Tree Friends), this might make her magic even stronger. She also mostly uses fire if she lacks of some stuff.

Medea is kinda not a good person and also not a bad person. If someone needs some help from her with the dark magic, she do agrees to help them out but must paid with "something" to complete the spell or magic. She even accept if someone ask her to do something bad, don't know what will happened next and need to be more careful to use it. One bad move might brings the bad curse. She warns someone if they wanted to use her magic or both of them will get the side effect. She might ignores any warning in the creation of spells or magic and also might overdo the magic. 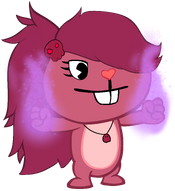 Retrieved from "https://happytreefanon.fandom.com/wiki/Medea?oldid=386347"
Community content is available under CC-BY-SA unless otherwise noted.