Start a Wiki
Mimi is a main character from Happy Tree Friends Fanon.

Mimi is a definitely social and friendly hot pink rabbit with one floppy ear and one straight ear. She probably got a floppy ear because she always has been flopping in around, and eventually flopped it down. She is very girly, and keeps a lot of nail polish.

She also carries around a red purse with a large gray button in the middle. She also wears a large blue bow on her head. Mimi also has painted-on nail polish on her paws. She is the only HTF to wear nail polish. Mimi always shops at fashion stores to buy new clothes.

Relationship Between Pranky and Mimi 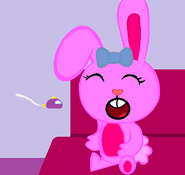 Mimi with Pranky
Add a photo to this gallery
Retrieved from "https://happytreefanon.fandom.com/wiki/Mimi?oldid=195530"
Community content is available under CC-BY-SA unless otherwise noted.