Just like other fangirls out there, just with more intense.

Not a Fan of Sports

Within a Wheelchair
Mocha is a character of HTFF.

Mocha is a mocha/brown dog or corgi who is being hyperactive fangirl all over the time. She wears a headband with #1 written on it and a pair of sandals. She often seen wears a foam hand with random person's name written on it, which shows her being a fan of the person.

Mocha is shown aggressive and hyperactive person most of the time. Her most known trait is she being an extreme fangirl of random person she meet and supports them as much as she can. Her interests always changing, as she gonna supports another person.

Being a fangirl, Mocha always gonna do anything and gives the extreme support the the person that she has a strong interest in. She also wanted their attention and always gonna follows them. Mocha is not shown on hating anyone too, but she seems heavily dislikes if someone hating the person who's she being a fangirl with.

Mocha seems can loses her interest of a person very quickly sometime, then proceeds to another person who she finds more interesting(she choose random person anyway). She even have a collection and stuff related to the person she likes. Some characters might found her annoying, even to the person she's rooting for. Mocha always causing trouble due her being an extreme fangirl. 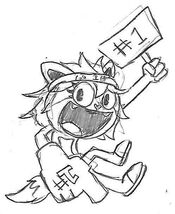