The Nanny Has Landed

The Nanny Has Landed (debatable)

Molly Puffins is a HTFF character.

Molly is a blue puffin who is distinguished by a red-and-white stripe pattern on her beak, bowtie, umbrella and hat. She also wears white gloves and red boots.

Molly views herself as the perfect nanny and a child at heart. She tends to show up unexpectedly at homes for babysitting. Her targets are mostly children or anybody she sees as a child or who has forgotten their inner child. She acts strict at first glance, but as soon as parental supervision has left, she will unleash her wacky, fun-loving side.

Molly can perform various unexplainable abilities, from pulling almost anything out of her hat to magically transporting others to bizarre places. Her antics can either entertain those she babysits or just terrify them. Molly's main goal is to give people as much fun as possible, sometimes getting carried away and causing chaos to ensue. Her hat is the primary source of her magic and can be especially dangerous in the wrong hands. 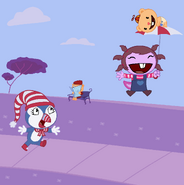 Still a better caretaker than Pop.
Add a photo to this gallery
Retrieved from "https://happytreefanon.fandom.com/wiki/Molly_Puffins?oldid=386664"
Community content is available under CC-BY-SA unless otherwise noted.