Happy Tree Friends Fanon Wiki
Register
Don't have an account?
Sign In
Advertisement
in: Characters Not To Be Used In Profit, Fan Characters, Duo Characters,
and 15 more

Double pranksters,
what else can go wrong?

Triple Trouble
Morton and Mix are characters of HTFF.

Morton the brown bull with his partner Mix the golden goat are also known as The Prank Duo. They both are always seen together while making a prank.

Morton mostly leads all the pranks and Mix helps his partner to do their main interest. Sometimes, Mix can start the prank or they both do it together.

They are actually a very smart team and clever when doing a prank. Their prank sometimes includes some science stuff that is actually very dangerous to others and even themselves. Their typical prank starts with a normal prank but when they keep doing it, their pranks can be deadly. When someone tries to put a prank on them, they can easily detect and avoid it.

The duo is always seen hiding somewhere during their prank. Most people get very annoyed when they appear and try to keep away from them but every time they appear in the area, some people will get into their planned pranks. They always make a plan before making a prank for people.

Mix is actually mute and never makes any sound. This is why Morton is the one who often leads the pranks. Mix communicates with others by using hand signal and his expression. When doing a prank involving science, Mix leads all the prank while Morton helps him. Mix can be emotional when someone insults him, mostly when someone calls him an idiot or moron. Mix will do something to proves he is not an idiot.

They sometimes can end up arguing and fight each other especially when their prank fails. They never give up in making a prank and always try to find a way to complete it. When they're around, one must be very careful when seeing them. They might be very dangerous sometimes. Their deaths mostly involve their own pranks. 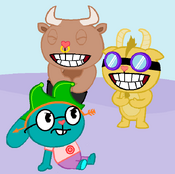