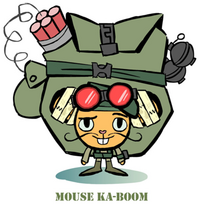 Mouse Ka-Boom is an orange mouse who is seen in W.A.R. Journal - Operation: Tiger Bomb. He is French, as he usually says "le" before a sentence or an action, as well as sporting a French mustache. He has protective goggles and a backpack full of bombs. His ears are bandaged and he is deaf from the explosions that he has been around. He fought alongside Flippy in the W.A.R. Mouse Ka-Boom is a explosives expert, as he can make bombs disguised as everyday things (such as apples).

One of his bombs would have killed the Tiger General, but it bounced off a pizza the general was holding. Mouse Ka-Boom accidentally caught it with both hands, but he couldn't get rid of the bomb because the cheese was making it stick to his hands. He ran to Flippy for help. Flippy used his knife to cut the fuse, but accidentally cut Mouse Ka-Boom horizontally in half. The lit fuse landed in his open back-pack full of bombs, causing a huge explosion. All that remained of Mouse Ka-Boom were several body parts and a lot of blood. According to Kenn Navarro, Ka-Boom's death is not permanent as his deafness will be explored in future episodes. 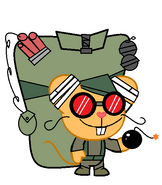 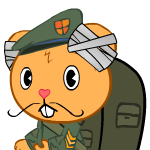 A different version of a HTF style Mouse Ka-Boom (design by Gimlodz).

Mouse Ka-Boom in W.A.R. by Chama
Add a photo to this gallery
Retrieved from "https://happytreefanon.fandom.com/wiki/Mouse_Ka-Boom?oldid=280335"
Community content is available under CC-BY-SA unless otherwise noted.