Start a Wiki
Movy Disc
Movy, or Movy Disc[1][2] is a fan character who won Waterclam's first Vote or Die.

She seems to be intrested in anything in form of disc.

She is a light purple animal with a blue belly marking and discs for earrings. On the back of her says "ON DVD" and a sticky note saying "$5.99", which was put on by Pierce in her first episode.

Movy at a CD/DVD store 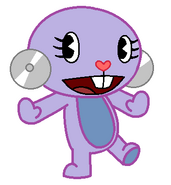 Retrieved from "https://happytreefanon.fandom.com/wiki/Movy?oldid=362580"
Community content is available under CC-BY-SA unless otherwise noted.