Neena is a light blue cat that has long brown hair, wears magenta glasses, light blue outfit and blue pants. She often appears alongside Tacho, helping the tree friends in their adventures. She has a crush on Nutty. She hates walking in shoes so she always is on barefoot. She's generally nice to others, be it her friends or her own family. She has a fear on bugs, and dislikes bullies and mean people.

In HTFA series, she often assists the main tree friends in anyway possible, like allowing them to ride on a jet ski to go through water levels. She and Tacho made their first playable role in HTFA Land.

Neena got a tickle

Neena with her best friend Elica 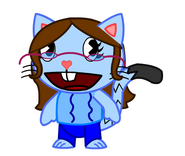 Add a photo to this gallery
Retrieved from "https://happytreefanon.fandom.com/wiki/Neena?oldid=362337"
Community content is available under CC-BY-SA unless otherwise noted.