Nimbus is a character of HTFF.

Nimbus is a blindfolded purple bat with messy hair and wears a white scarf. He can only 'see' things with his ears. Nimbus, hates loud sounds, or very noisy sounds.

Nimbus, favors quiet sounds. He also likes playing sports that are related to the sky and flying, such as paragliding. He also befriends with Ellie because she is a sport lover.

Like the Mole, he always makes mistakes due to his blindness. Mostly when noisy sound disturbs his 'sight', that can lead him to his death and also kills. Noisy sounds mostly come from Lumpy and Flaky( her scream).

He sometimes wears safety helmet when he doing some sports. His house is on the mountain so he can go hang-gliding.

Something noisy will piss him off, but he can controls his temper down. Most of the time he enjoys to stays in his zen-themed house. He also enjoys make some herbal tea sometimes and hears peaceful musics.

Someone doesn't not care about his hearing and makes noisy things will responsible to Nimbus' death and the others. 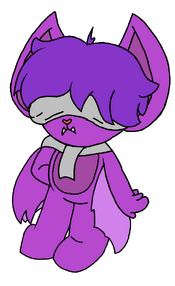 Retrieved from "https://happytreefanon.fandom.com/wiki/Nimbus?oldid=357115"
Community content is available under CC-BY-SA unless otherwise noted.