Nippy is a main character of Happy Tree Friends (fan-made).

Nippy made her debut in, Sleep Walking on Sunshine, and later made her first starring role in Next-box 360.

Judging by a few pictures found as sketches, she is intrested in playing ball and is friends with Lumpy. She seems to have a love interest in Flippy, also flipping-out sometimes. 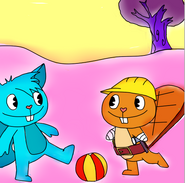 Nippy being held by Lumpy

Add a photo to this gallery
Retrieved from "https://happytreefanon.fandom.com/wiki/Nippy?oldid=285121"
Community content is available under CC-BY-SA unless otherwise noted.