Quist: Talk to the Hand
Nuppet: From the Waist Down

Quist is a purple rabbit. She enjoys her hobby as a puppeteer even though she may not really be good at it. She has an obsession with puppets, owning a wide collection of them at home; although Nuppet is her most beloved one. Sometimes, she wears sock puppets over her feet, hands, and ears. She often talks to puppets as if they are living, to the annoyance of many characters.

Nuppet is a purple puppet with googly eyes and a little something extra: he is actually alive, but Quist is unaware of it. When somebody else puts him on, Nuppet is able to control the wearer and get him/her into trouble. Other characters may find out he is alive but Quist would only assume they are crazy (pretty much like a reverse Lammy and Mr. Pickels). Though mostly silent, Nuppet can make a faint high-pitched voice on occasion. He has a nasty habit of biting people. 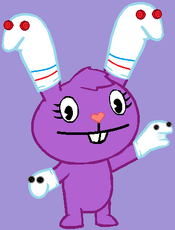 Retrieved from "https://happytreefanon.fandom.com/wiki/Nuppet_and_Quist?oldid=383281"
Community content is available under CC-BY-SA unless otherwise noted.