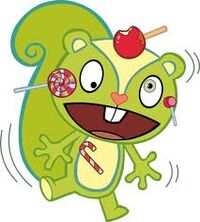 Nutty is a green, candy-addicted squirrel with a yellow, diamond shaped marking on his head, a lazy eye, candy stuck to his fur, and a big swirly tail that curves like a candy cane. As a result of his huge sugar intake, he is often hyperactive and jittery, even the slightest amount of sugar will set him off. He giggles more than he talks, he even giggles occasionally when he is dying. However despite his condition it has been shown he has some since outside his candy addiction. And is easily friends with the other Happy Tree Friends characters. The three most notable friends are Flippy, Flaky, and Mime.