Happy Tree Friends Fanon Wiki
Register
Don't have an account?
Sign In
Advertisement
in: Characters Not To Be Used In Profit, Regular Fan Characters, Fan Characters,
and 12 more

Watch the ground when walking!

Zet (Nothing to Sphere)

Nothing to Sphere
Oscar is a character of HTFF.

Oscar is a midnight blue meerkat with dark or black markings on his body. Unlike other meerkats or most characters, he has blunt fangs instead of buckteeth.

Oscar is mostly known as a coward who is afraid of everything else from the outside. He'd rather stay underground to keep himself calm and safe from the "ghosts" that he sees every time. He might suffer from schizophrenia as the ghosts that he sees are only his hallucinations, though sometimes they might be real.

He might be a very cowardly and timid person, but he can cause huge troubles on others. Oscar will quickly dig through the ground when something is frightening him and ruin the surface as he moves very randomly. Oscar will be also not aware of everything else when he's frightened, causing him to bump into multiple objects in the ground, also causing side effects.

Oscar's home consists of various tunnel systems and rooms, with his front entrance being a vault door. He is so timid that he often hides underground, rarely surfacing unless he is scared out by the ghosts he believes are haunting his home. Oscar is rarely seen being calm and trying to stay away from others, but he always ends up causing danger to others and also himself. 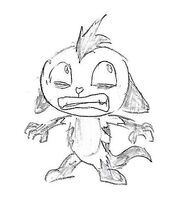