Noc Nocturnal
Paws is a female Genericaling that takes the fourm of a purple lynx. She is a witch in training and the apprentice of Sunset, and the third youngest of the Davis family.

Paws was once a normal girl until she got into a freak accident that literally changed her life.

She feels like an outcast and wishes she felt like she belonged, despite this, she does a fair amount of friends.

Paws tends to act very curious and cocky, although sometimes shy. She is psychically really weak and tends to be the butt of the joke at times. She does have her fair share of mood swings, as sometimes she's annoyed and frustrated, other times she's sensitive and frail, depending on who's annoying her.

She does have her special inserts, these include but are not limited to cleaning, dolls, nature, cats and watching horror movies.

Her witch outfit stays the same. 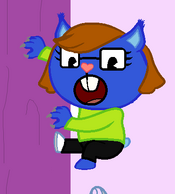 Retrieved from "https://happytreefanon.fandom.com/wiki/Paws?oldid=411996"
Community content is available under CC-BY-SA unless otherwise noted.