Start a Wiki
Peckins is a fan character of HTFF.

Peckins is a woodpecker chick who is the child of Pecky and Peckia. He looks like a typical woodpecker except he has no beak, caused during development inside his egg due to incidents in Woodpecked Husband. His face - instead of a beak - consists of a hole which is used for him to eat and breath with.

Despite his deformity, Pecky and Peckia care a lot about their son. Peckins wants to be able to peck holes for trees like his parents, only to become saddened by his inability to do so. Pecky regularly tries to help his son deal with this problem.

Peckins is also unable to fly like his parents, which is more natural considering his age. He appears to get along with other chick characters such as Hatchy, Plucky and Munchkin.

Peckins with Pecky and Peckia 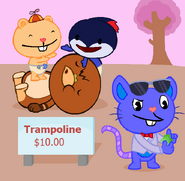 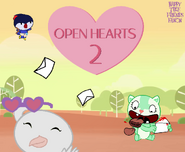 He's apparently too hungry to notice the worst species he can ever come across.
Add a photo to this gallery
Retrieved from "https://happytreefanon.fandom.com/wiki/Peckins?oldid=380829"
Community content is available under CC-BY-SA unless otherwise noted.