Start a Wiki
Pine Scent (Pine for short) is a fan character.

Pine Scent is a dark blue & purple-white skunkupine (skunk and a porcupine hybrid).

She wears an air freshener around her neck and usually smells like pine for doing so. Pine Scent is Zelena's cousin. She's upbeat and curious most of the time. However, she releases a foul odor when under stress, much to other Tree Friends' disgust.

It is shown in Pine with Me that she can make her own perfume. 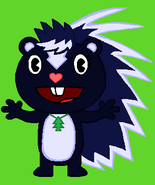 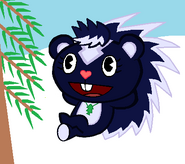 Pine hands the newspaper to Toad
Add a photo to this gallery
Retrieved from "https://happytreefanon.fandom.com/wiki/Pine_Scent?oldid=380779"
Community content is available under CC-BY-SA unless otherwise noted.