Piper is a HTFF character created by LOD and then adopted by La Coco.

Bark (According to himself)

Piper is a sandpiper that has most of her body, other than her head and legs, inside a large pipe; She really does take her job seriously!

Being a highly dedicated plumber, mainly due to a certain plumber in videogames, she ended up stuck within a pipe during one of her many working days; since she didn't see it as a big problem (Also to save some money), she decided to keep it on for the remainder of her life.

She is usually seen working as a plumber in small, narrow spaces with several small pipes. Due to her thin body, she can enter this places with ease compared to most characters. She usually keeps Handy company during her job; alongside her gloves in what remains of her limbs, she is always willing to lend a hand on whatever problem you may find yourself in!...or you could simply use some bleach.

Despite being a hard worker, she loves dwelling back into her childhood for she used to play videogames all the way back from the 80's-90's, one of these even inspired her to get a job as a plumber! She expresses her love for said games by using accessories or clothing that makes reference to decade-long franchises while other times she bitterly complains how modern videogames aren't the same as back then. She can sometimes be found in arcades; do not let the pipe fool you, she's very skilled!

She likes plants, especially piranha plants; her love for said plants once got her into a "bed" of sticky vines while playing with a group of friends. Some of the vines got stuck on her pipe and began to quickly grow around her...although, instead of being harmful to her, these vines prove to be useful as ropes for her to hang her wallet or even tools from her job; however, if one of these vines happens to tangle around her neck, things can get a bit unpleasant...and lethal.

Relationship-wise, she's in search for a "prince", jumping much like in a platformer videogame, perhaps with a serving of mushroom soup, her favorite.

Normally, she keeps a positive attitude for very few things can change her joyful smile. She shows enthusiasm while working, all while being very active and quite a hard worker, although she can be a bit stingy.

Despite her positive attitude, she can also prove to be annoying whenever she gets nostalgic, for she harshly criticizes anything new for...well, being new. She's very old fashioned.

She also shows to be easily distracted, whether of her surroundings, or of what other people say about her. This even happens during her work which can lead to gruesome accidents.

She is a soft, Marroc colored sandpiper with markings on the bottom of her face, alongside a gray beak and legs. Her hair is dual-colored, most of which is colored chocolate, coupled with a black, short, wavy bang. She "wears" her large, dark teal color pipe on her body thus making her taller than average.

Her actual clothing consists of a blue cap, with light spots and a letter on its forehead, which is "P", next to a small, yellow, star-shaped ornament. Her purse, which resembles a light blue, white-spotted mushroom, hangs loosely from the vines that grow from her pipe. These vines also carry her wrench, her main tool for the work. She wears black gloves on her claws.

Bark: They're rivals, according to Bark, due to their similarities. Most of the time, Piper ends up humiliating Bark by accident which she fails to realize, or even Bark's presence altogether.

Chomp: Piper loves this little creature, although Chomp doesn't share the same feeling towards her...

Her deaths are usually related to pipes and water (drowning), but they are also related to being hanged (or hanging others by accident) by her own, tough-as-nails vines. She also tends to be cut in half horizontally. 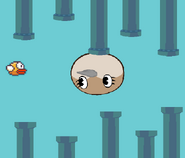 Piper before getting stuck.

Rat lover
Add a photo to this gallery
Retrieved from "https://happytreefanon.fandom.com/wiki/Piper?oldid=386659"
Community content is available under CC-BY-SA unless otherwise noted.