Pouches is a HTF Fanon character.

Pouches is a emerald green Kangaroo Rat who's mouth is always full of food. She is very freindly and playful but Pouches is also has no manners and makes a mess wherever she goes, making her the bane of neat freaks. Her lack of manners also mean she will act rude sometimes, such as cutting in line, talking during a movie, or taking something without asking.

Due to the large amount of food in her mouth, whenever Pouches talks, food ends up flying out of her her mouth, often disgusting other characters. Its also shown that if all the food in her mouth is gone, Pouches will freak out and begin shoving any nearby food into her mouth, sometimes putting things that can harm her in there too. Pouches also has a rather long tail which can cuase trouble for her and others.

Pouches' tail will sometimes get cuaght in objects or trip charcters, causing harm. Despite this, Pouches often acts as if nothing is wrong, even if something awful is happening right by her. she is shown to be friends with Slop and Pudgy along with Cuddles.

Her deaths often included her head. 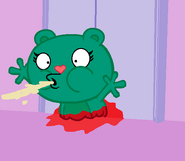