What's Prong with You?

Pervy (What's Prong with You?)

What's Prong with You?

Prongs is a HTFF character.

Prongs is a green pronghorn antelope who wears a makeshift suit of armor made of cardboard.

He has sharp horns which can be very useful for a variety of things. He may use them as can openers, barbecue forks, screwdrivers, and to hang laundry; just to name a few. However, these horns can also be very problematic.

Prongs is an active character who regularly spends time outside. He can also be clumsy and ignorant at times. Whenever he breaks or punctures something with his horns - or injures someone - he will try his best to fix his mistake, inevitably making it worse.

Prongs enjoys outdoor activities. He is particularly shown to have an interest in medieval chivalry, hence his outfit. Whether he participates in live-action roleplaying or theatrical performances, he always displays a "brave knight" act. But when trouble arises, so do his more cowardly tendencies, as his armor proves little use to danger and he must solve matters with his horns. 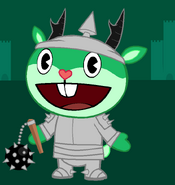 Retrieved from "https://happytreefanon.fandom.com/wiki/Prongs?oldid=383596"
Community content is available under CC-BY-SA unless otherwise noted.