Late in a Lake

Late in a Lake

Quacko is a fan-made HTFF character.

Quacko is a lazy yellow duck with an orange bill and three stray hairs on his head, a blue floatie, snorkel, and blue fins. Quacko likes to eat, sleep, and swim. Hours without eating may lead to Quacko going insane. Whenever Quacko enters lakes, he always has to be sure it is safe due to his fear of alligators, piranhas, and sharks. Every time Quacko talks it comes out with a quack.

Quacko is often set on fire or electrocuted. Quacko is seen wearing his floatie almost everywhere he goes. Some think it's stuck on him. Whenever Quacko eats to much food he will known to get fatter causing him to lay a golden egg.

Quacko is also known to be enemies with Petunia since he is always to lazy to take the garbadge out. He also sometimes doesn't help the environment.

In the episode Aquactic Fear Quacko gets aquaphobia.

Quacko's appearance is just a typical duck. Quacko's color is yellow and he has orange beak and legs and a blue floatie.

Quacko as a zombie. 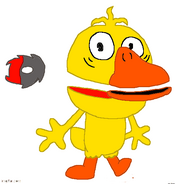 Add a photo to this gallery
Retrieved from "https://happytreefanon.fandom.com/wiki/Quacko?oldid=386239"
Community content is available under CC-BY-SA unless otherwise noted.