Happy Tree Friends Fanon Wiki
Register
Don't have an account?
Sign In
Advertisement
in: Characters Not To Be Used In Profit, Characters, Fan Characters,
and 12 more

Let's hope he don't messes things up this time.

Tromp (Beak It Up)

Beak It Up
Rafie is a character of HTFF.

Rafie is a blue toucan who is a bit clumsy and always in mess, also can be very worry person. As a toucan, he have huge beak with a dark mark. His hair appears to be messy that might contains bugs and small fruits, which he not aware of. Rafie also wears a pair of brown gloves and boots. Both of his hands are actually covered with bandages.

Rafie is appears to be a bit of tropical person, who loves fruits and relaxing at the rainforest or beach, mostly on the trees. Despite being a toucan, he really dislikes insects and bugs, even fears of them sometimes. The bugs always flies or get into his messy hair out of his knowing. Small fruits also can get into his hair. The insects always chasing him for fruits or his hair for unknown reason.

Rafie trying to keep himself relax as he's being a bit shy(or coward, mostly around girls) and always worries over something, worsen whenever Emmy is nearby. He also stutters whenever he talks. 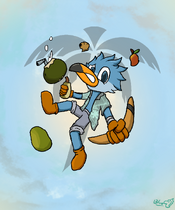