Don't ever let him fix anything.

Ratchet or Ratch is a character of HTFF.

Ratchet is a grayish brown bat who is actually an inventor and engineer. He is usually seem wearing protective googles and fingerless gloves. When he's not wearing his googles, his pupils are actually light gray.

Ratchet might be appears to be a smart person, but he mostly dumb about creating something despite being an inventor and engineer. He loves creating gadgets and inventions and doesn't care if they are broken. He also having assertive and hyperactive personality. Ratchet mostly seen in daytime instead of nighttime.

Ratchet actually showing no fear when failing even it's causing his own death. Not only his inventions are broken, when comes into helping someone, he makes it even worse since he dumb about fixing and creating something. He likes to advertises his inventions to other people and wanted them to try it for free sometime.

Ratchet might enjoys seeing other people's inventions and check them out. Doesn't care if it better than his but there's high chances that he accidentaly make it broken. He can be appears out of nowhere without being called and wanted to help someone or to advertises his stuff. Sometimes, he cares more about his inventions than other people's fate. 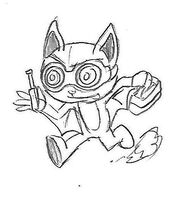 Retrieved from "https://happytreefanon.fandom.com/wiki/Ratchet?oldid=387623"
Community content is available under CC-BY-SA unless otherwise noted.