Exit to the Tree Shop

Raymond is a character created by Yellow-Spider-Kitty.

In general, Raymond has a very hyper-actative personality, they loves having fun and making the world around them a fun place. They generally considered naive and immature. For the most part, he has a good heart.

Despite what it seems, not everything is sunshine and rainbows for them. Growing up Raymond has had a dark shady past, between their legal troubles and tragic life story, Raymond tries to pretend everything is going fine at times but finds themself struggling.

Raymond has issues with her mental health, They have been diagnosed with chronic schizophrenia, he often has voices in the head telling them to do bad things, they took and insert in music as a forum to "fight those demons". They were also diagnosed with high functioning autism (Aspergers' Syndrome) as a kid, this also factored into his special insert in music.

Raymond is usually multi-generated, ranging from Pop, R&B, Rock and even Avant-Garde. Their main instrument is her tiny piano she carries around.

Their most successful song is his R&B ballad, "Fell From the Sky", a number one single in 1995.

Originally male, Raymond is now a girl and has long blue hair, eyelashes and a white and blue skirt (the cause of this was revealed in The Gender Bend Story). In Tailure Is Not An Option, she develops an uncanny cattail-like tail and she will shoot out spikes from the tail whenever she is scared or surprised. The spikes will often lead to other tree friends' deaths. Starting in The Buck Gets Weird, her trunk is turned into a typical heart-shaped nose because only male elephant seals have large noses. 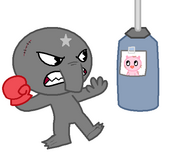 Retrieved from "https://happytreefanon.fandom.com/wiki/Raymond?oldid=385018"
Community content is available under CC-BY-SA unless otherwise noted.