Rex is an anti-hero. He fought in the war with his allies Sapphire, Flippy and Ale. He is very brave and he would do anything for his allies to survive the war. He is very protective over his friends. He's a very common character to appear in Happy Tree Friends as he's in almost every episode. He has protected his friends for the whole war and his leg was shot in one episode. He is very attractive to the girls in Happy Tree Friends and therefore Disco Bear dislikes him. He also had special training by a soldier in the W.A.R., So he is more likely to survive than some other Tree Friends. Plus, when he battles he has the ability to suck blood, which makes him very powerful. He is also quite large. His normal weapons are a Bowie Knife and he is known for his reflexes and agility. 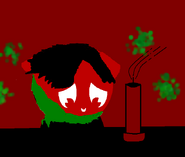 Add a photo to this gallery
Retrieved from "https://happytreefanon.fandom.com/wiki/Rex?oldid=78606"
Community content is available under CC-BY-SA unless otherwise noted.