Rolly is a HTF fan character.

Rolly is a honeydew-colored ringtail lemur who wears a salmon pink bow. Rolly is almost always seen wearing her signature rollerblades which are salmon pink like her bow. As her looks indicate, Rolly enjoys rollerblading, along with other skating-type sports. Rolly is very energetic and will rarely stop doing something until it is complete or it becomes impossible to do. While often seen at the park and skating rink, Roller can sometimes be found at the hospital, often due to an injury from skating.

While she is great at skating, Rolly is easily distracted by anything that is shiny, like metal or jewel. If she spots anything shiny, Rolly will stop paying attention to her surroundings and instead look at said shiny object, often leading to the deaths of her or others. Rolly can also be a bit reckless, often paying little to no attention to rules or laws, which can cause deaths and makes her the bane of law-abiding characters like Frilly. 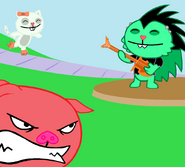 Rolly distracted by a shiny object.

Next time, try to not get distracted.

She did not see that coming.
Add a photo to this gallery
Retrieved from "https://happytreefanon.fandom.com/wiki/Rolly?oldid=371640"
Community content is available under CC-BY-SA unless otherwise noted.