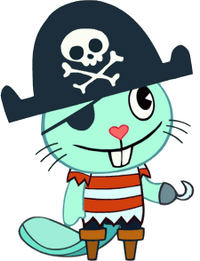 Russell is a turquoise sea otter with typical pirate accessories such as a jolly roger hat, a striped red/white shirt, a hook, an eyepatch and two wooden peglegs. He enjoys fishing, sailing and eating seafood. He has two girlfriends who don't appear in the series. One is named Belle whom he once saved from drowning in the water. His other girlfriend is named Marina. She and Russell were to wed in the future, but due to Mandy and Russell's togetherness it cannot be. Russell broke up and went to Nettle but it soon ended after Nettle went to Holly. Then they broke up again and he decided to marry Anna because she is an otter just like him.

Sometimes, when put in a scary or violent situation, Russell will go insane and start laughing in a crazy manner and his eye turns into grey like Flippy, as seen in Get Whale Soon and Snow Place to Go, but instead of killing people, he just slashes stuff with his hook

Retrieved from "https://happytreefanon.fandom.com/wiki/Russell?oldid=391559"
Community content is available under CC-BY-SA unless otherwise noted.