Santa Claus is a special fanon character who appears in the Christmas DVD A Jolly Happy Soul.

He is obviously based on the legendary historical figure who appears in folklore and numerous media. In HTF form, he is a polar bear who is fatter and slightly larger than most typical characters.

He made his debut in the DVD segment North to the Workshop. It has been said that he will rarely (if ever) die, as he is immortal and has many magical powers. Although normally loving and caring, he is said to have a severe hatred of particularly naughty people. He also dislikes when people dress up like him. 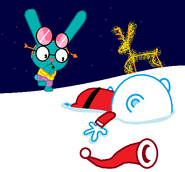