Savaughn is very short tempered. Anything that goes wrong can make him very angry however, he will not flip out. (Normally he only flips out when he see's bullying or name calling or if he hears a name he was once called) When angered, Savaughn may yell so loud that windows may break. It mostly involves one department member messing up. (As seen in Anger Management)

Savaughn is a nice and very friendly grey wolf who is the chief of the police. He wears a blue uniform with four gold stars on each arm. He wears a black tie but most of it is hidden due to uniform. He has black pants with yellow stripes on it as well as dog tags around his neck. He even has one of those police hats with the badge on it and the same gloves as Ale. He can flip out sometimes, but only when someone calls him a name or says his name wrong like when he was in school. People called him lots of names he didn't like. He also served in the very ending of the war. Savaughn loves pets and animals and his most favorite animal is an owl. His favorite pet is Lunar, an old tabby cat who is 70-years-old in cat years.

Savaughn has an Evil side named Savana or just as known as Evil Savaughn. He will kill anyone in sight, even Josh (his friend) and Flippy. He got his PTSD from school in grade 6 from being called names too much. He does have guns which he will use and a Bowie knife from the war. Savaughn has a pistol and a sword; he might use these to kill sometimes. 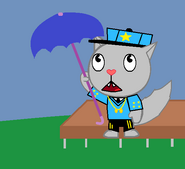 It's about to rain

Feels suspicious about that corrupted cop.

He must feel better not having Zet on his side, but... it's worse.
Add a photo to this gallery
Retrieved from "https://happytreefanon.fandom.com/wiki/Savaughn?oldid=417637"
Community content is available under CC-BY-SA unless otherwise noted.