Senior is a fan character.

Senior is a brown giraffe wearing a blue bowtie and cape and is often seen holding a cane. He is a curator at a museum he owns. His tall size can be both advantageous and disadvantageous. But most of the time, his tall size makes him susceptible to incoming hazards.

Despite his duty, Senior is actually rather careless, as he often falls asleep during his job. As a result, his museum can become an easy target for thieves. Senior also seems to be scared of insects, as he tends to ask someone else to do anything important that involves those creatures. He is also scared of frogs and mice (even including the tree friend-looking ones). Those fears, however, have been toned down in his more recent appearances. Also, when it comes to public, he tends to be more serious and tries to hide his usual personality, just to avoid lowering his reputation. He is also known as a harsh art critic that usually drives most hard-working artists angry or extremely disappointed.

Sometimes, he wants to kidnap Cro-Marmot or any other tree friends that are part of the past times, just to fulfill his museum's collection. He is not as dumb as Lumpy, but once he sees someone that looks like a prehistoric or historical figure (even if he/she is merely dressed up as one), he might go crazy and chase after him/her.

Senior hopes to make Sir Gron, Wrappy, Stubbs, and Takeda Nokashi a part of his collection 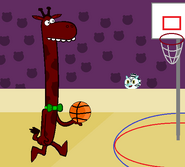 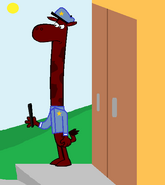 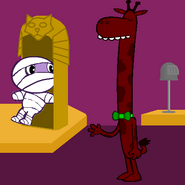 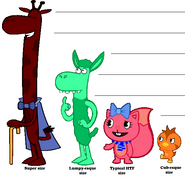 How would you react to see a costume's interpretation of you?
Add a photo to this gallery
Retrieved from "https://happytreefanon.fandom.com/wiki/Senior?oldid=385573"
Community content is available under CC-BY-SA unless otherwise noted.