Start a Wiki
Sheepy is a HTFF character.

Sheepy is literally a wolf in sheep's clothing. However, she assumes she is a real sheep; doing things such as bleating and eating grass. She has in fact been adopted by a family of sheep and has no idea of her true species.

She wears a white wool hoodie which she never takes off because she thinks it's attached to her skin. Most people are aware she is wolf in a wooly suit, but whenever someone tries telling her, she will simply assume they are crazy. Her guise is enough to fool certain characters though.

Friendly and docile most of the time, there is one thing that triggers Sheepy. Whenever she comes into contact with blood or meat (tasting or smelling it), her suppressed carnivorous instincts take over and she mauls whoever is nearby. 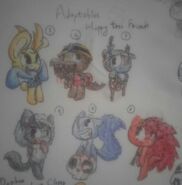 Even for Lammy, this is strange.

They're perfect for each other.

Who's the real wolf in sheep's clothing? 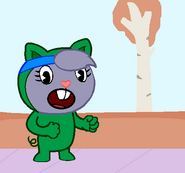 Now her name is Piggy.

One sheep she could get along great with.
Add a photo to this gallery
Retrieved from "https://happytreefanon.fandom.com/wiki/Sheepy?oldid=385873"
Community content is available under CC-BY-SA unless otherwise noted.