Start a Wiki
Shelly is a fanon character of Happy Tree Friends.

Shelly is a green turtle. She is sometimes a coward and often hides in her shell and on some occasions, she has some moments of bravery. She sometimes turns evil and goes on a killing spree whenever she gets annoyed by someone or something. She enjoys planting flowers in her garden, listening to jazz music and playing her clarinet. She sometimes ends up in situations where her shell ends up being destroyed or taken off leaving her naked.

Shelly is Crazy's girlfriend and she likes him because like her, he enjoys jazz music and plays an instrument and he likes her because he thinks she's cute. 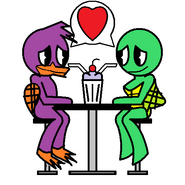 Crazy and Shelly on a date
Add a photo to this gallery
Retrieved from "https://happytreefanon.fandom.com/wiki/Shelly?oldid=201728"
Community content is available under CC-BY-SA unless otherwise noted.