Silhouette is a fanon character of HTF and the winner of the creator's second Vote or Die poll.

Silhouette is a dark blue groundhog with some hair standing up on her head. She has Sciophobia, or a fear of shadows. Many shadows scare her, but none are worse than her own.

Although silent, Silhouette's shadow constantly torments her. It can change form, size, and even leave Silhouette's body. It is also an immortal entity that can survive virtually anything. So it can continue to live even when Silhouette dies.

Silhouette's shadow will often do things, such as attack other peoples' shadows, or other shadow-related activities. Silhouette herself is later shown to have done these and gets the blame.

It is possible that she is only imagining her shadow coming to life. However, there have been clues proving her shadow is a living being, such as its tendency to harm the shadows of other characters and use shadows of objects and weapons.

One of the worst time Silhouette's shadow gets active

Silhouette and the Evil Shadow: Coming after you die to theaters. 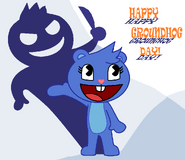 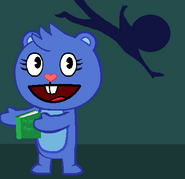 Silhouette with Emmy
Add a photo to this gallery
Retrieved from "https://happytreefanon.fandom.com/wiki/Silhouette?oldid=383287"
Community content is available under CC-BY-SA unless otherwise noted.