Slender Loris is a character based on the primate species of the same name. He is also based on Slenderman, a popular internet legend started by Something Awful Forums.

He has a black body and white belly similar to the suit worn by Slenderman. He also has long thin arms, a description of both Slenderman and slender lorises. Like his species, he has huge saucer-like eyes. While Slenderman is usually described as being faceless, Slender Loris is partially faceless since his eyes take up most of his face.

He made a one-time starring role in the season 22 finale Return to Slender. He appears two final times making cameos in Disguise-ful and Final Scare (of the Specy Spooktacular DVD). It is unknown whether or not he will appear again, but if so he is likely to appear only in Halloween-themed episodes. 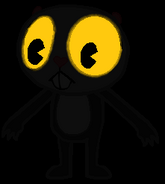 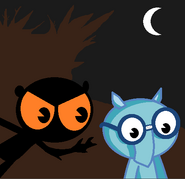 Appearance in Return to Slender

Wallpaper appearance
Add a photo to this gallery
Retrieved from "https://happytreefanon.fandom.com/wiki/Slender_Loris?oldid=369363"
Community content is available under CC-BY-SA unless otherwise noted.